Recently, a certain video blog has exploded in popularity across all internet platforms. Eager to learn more and driven by curiosity, XiaoYi decided to watch the video.

In the video, the blogger discussed how he was moving, but faced issues regarding the durability of the cardboard boxes provided by Chinese relocation companies. He complained that Chinese cardboard boxes were fragile, while the ones he had brought back from Germany had remained usable for almost 20 years.

The blogger believed that the life span of a cardboard box was dependent on whether or not the bottom would sag or break while storing heavy items. The German cardboard boxes featured additional cardboard flaps that could fold inwards. Boxes with this design completely eliminated the need to use tape to support the bottom. In contrast, Chinese cardboard boxes required several layers of tape around the box to remain sturdy.

After watching the video,XiaoYi cringed internally.

Claiming that “Chinese cardboard boxes are not worth using” based on only the criterion of whether or not it has a secure base is an extremely biased assertion.

Then How Should the Quality of Cardboard Boxes Be Judged?

There is only one true option!

We should judge the quality of a cardboard box based on the following four criteria:

（3）Structure of the cardboard

The most commonly used cardboard boxes have either three or five layers.

SAE chooses to use five-layered boxes, as they are comaratively better than triple-layered boxes at preventing sharp objects from cutting through the box and damaging its contents.

SAE uses AA rated high-quality cardboard material, which promises both lightness in weight as well as rigidity and firmness in structure.

Cardboard structure refers to the size of the apertures in the cross-section of the cardboard.

The larger the indentation of the corrugated cardboard layer, the higher its ability to bear heavy loads and withstand high pressure.

Hence, SAE cardboard boxes are perfectly capable of bearing the weight of a grown man.

After careful measuring of cardboard boxes on Taobao that claim to be 40 cm tall, their actual height only reaches 37 cm. This not only decreases the actual volume and capacity of the cardboard box resulting in inefficiency in the transportation of items, but it also makes it difficult to fit large objects into the cardboard boxes.

The quality of SAE’s cardboard boxes is based on 10 years of experience in relocation services and has undergone many adjustments before settling on the dimensions of 48*48*48 cm. These dimensions not only ensure that transportation space is used reasonably and efficiently but also ensure that most everyday items can fit into the cardboard boxes.

Apart from the sizes Large, Medium, and Small, SAE also offers flat boxes, boxes for hanging clothes, and files boxes as well as many other special boxes shaped to accommodate all the different kinds of everyday items in your homes. 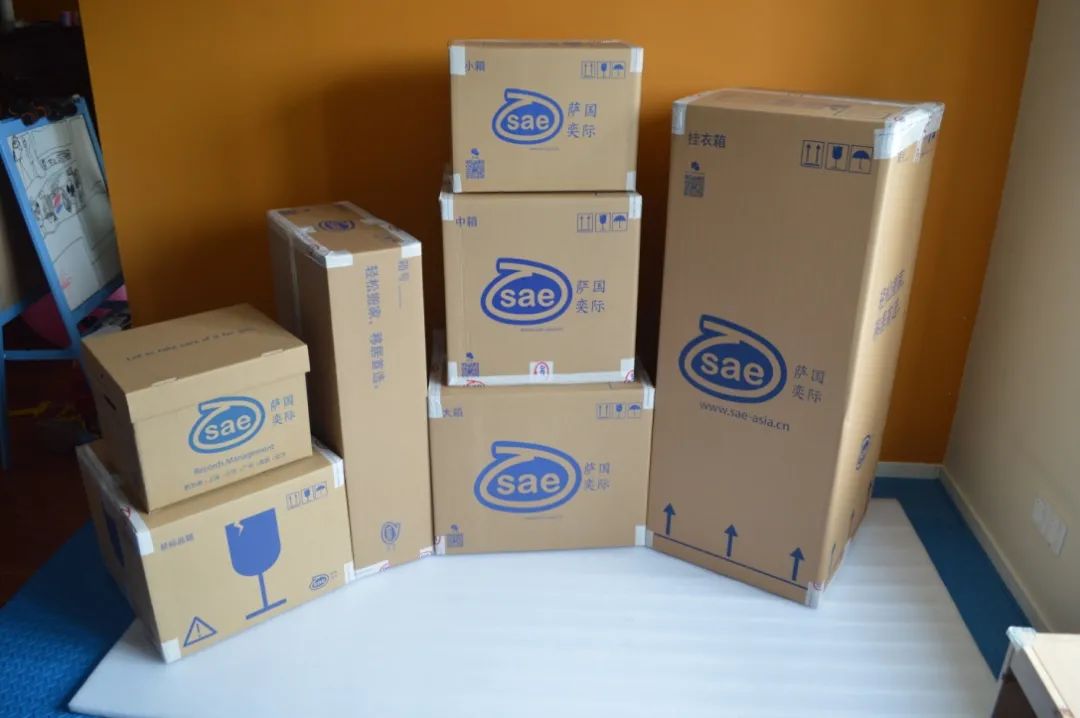 Cardboard boxes are important expendables used in relocation, and we strongly believe that details make the difference between success and failure. Move with ease with SAE!